Welcome, I have put up this website for the people interested in the George William and Maria (Lee) Yarwood genealogy. Much of these documents are 25 years old. I would like very much to include ANY information about this lineage ... so if you have any information and will share it, please send it to me. Either, scan it and e-mail it or mail it.

Also, if you have family news, reunion, gathering etc. and would like to post it, I'll do that. I can post it on the News & Bulletin Board ... or ... on the Family "Only" - Password Required page.

Send me your e-mail address to be added to the Yarwood distribution. 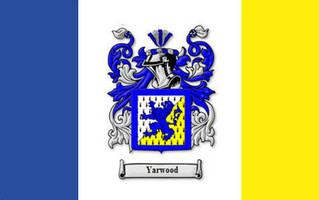 The above is or is not an accurate Coat of Arms for the Yarwod
name.  It is what is found on several website searches. I liked it
and have had  a flag and license plate made.

Much of the material and information here was prepared by William R. Yarwood (Bill) of Anaheim CA. Bill started in the 1970's collecting and sending out letters and notes [YARWOOD NOTES] about the Yarwood family.  Bill is no longer with us, but we owe a great deal of thanks for collecting and distributing much of this material.

Further, I must thank my Aunt Dorothy Gertude (Yarwood) Rolfs/Emmons, who provided information for the YARWOOD NOTES. Dorothy also published letters and documents herself.

This website will focus on YARWOOD GENEALOGY in general. Below is the George & Maria Yarwood descendants. George W. Yarwood, born 12/08/1827, Lincolnshire, England, He and his six brothers were orphaned at an early age when their parents died of TB, and were raised in an orphanage. He left the orphanage at the age of 16. He came to the United States in 1852 with Harry Wheatman and Jack & Edward Vine. They lived in New york at first, then came to Iowa in 1855. He settled on a farm in Calmer Twp. in Winneshiek County (in the area which came to be known as "English Prairie") where he remained the rest of his life. He married 02/29/1860, in Decorah IA, Maria Elizabeth Lee, born 10/29/1843, Racine WI, daughter of William Lee. George died 11/18/1902 and Marie died 11/28/1908. Both are buried in the Phelps Cemetery in Decorah IA. 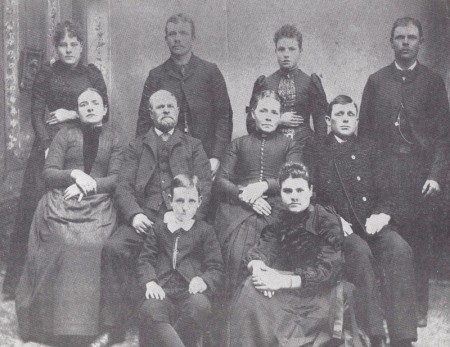 Recommend this page
© The Yarwoods
Login